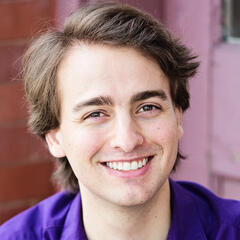 Alex is a Los Angeles based actor/performer/podcaster. 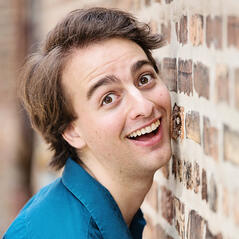 Alex began performing while pursuing a degree in chemical engineering at Oregon State University. His Intro to Theatre professor told his class to audition for the play she was directing. He went, auditioned, and... didn't get it. But the kid was hooked. Eventually, he did get cast and would act in an OSU play (almost) every term thereafter.
Alex went after every performing opportunity he could. With the help of a student director, he became a radio DJ for KBVR FM, OSU's radio station. There he created Small Time with Alex Small and Friends, a hour-long (if he was lucky) program he hosted featuring radio plays written and acted with his theater pals. Even when he was back home in Denver, CO, he would perform at stand-up open mics and take improv and voice acting classes.
After graduating, Alex moved to Chicago, IL to take his performing pursuits further. He started doing community theater productions and taking classes at Second City. Failing to be admitted into SC's Conservatory Program for the second time left him a little lost. That is when he converted his radio show into The Small Time Podcast, written and acted entirely by himself. He also began working with the physical theater troupe Theater Unspeakable. With them, he performed for young audiences across the country, most notably at the Kennedy Center in D.C. and the Lincoln Center in New York.
Upon deciding voice acting would be his focus, Alex moved to Los Angeles, CA where he currently resides. He hopes to make his living doing what he loves and bring joy to a large audience.

The Small Time Podcast is a scripted comedy podcast written and produced by Alex where in each episode he plays over 20+ characters. 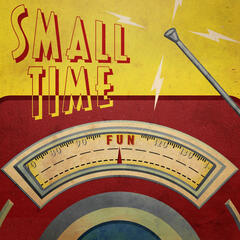 Alex prefers to be contacted via email but can also be reached through social media (buttons below).